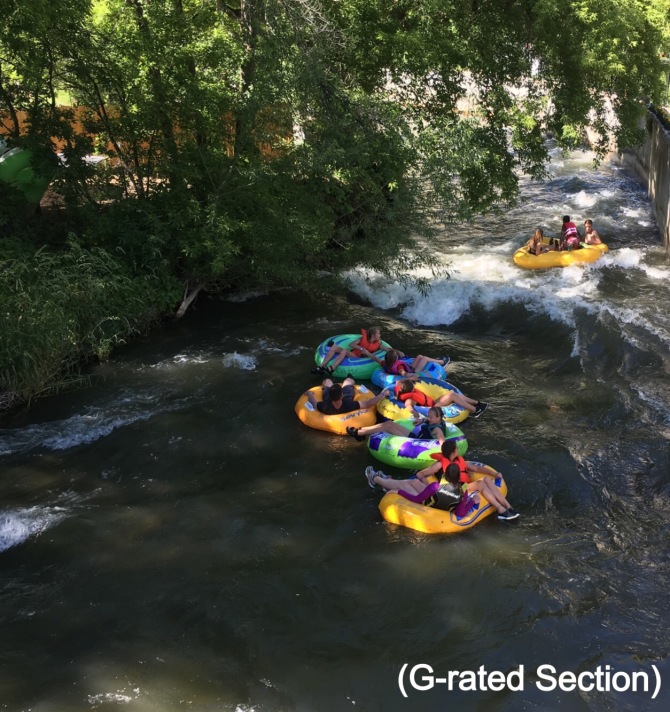 Just saying, before the post begins, today was a crazy day! We woke up fairly early today, but at a reasonable time. It was probably around 8:00 in the morning, which is a good time to wake up and be able to relax for a little bit before the day. About an after that I took s walk with my brother and my dad down to the store and we looked around. I got a map of the park (the park was Lagoon, for those that have not seen my last post) for my souvenir, but my brother got a box of pringles. We came back and got ready to start getting on the road. We got packed up fairly quickly, and we were on the traveling once again in no time. The road was boring for around the first hour or so, but the excitement was all after that for the rest of the day.

The first cool thing we had seen on the ride was The Great Salt Lake. It was a lot bigger than I had thought, covering an extreme 17500 CUBIC MILES. Wow! We didn’t get to actually go to it, just see it, but I do kind of wish we had. Apparently you can float on top of of the water because of all of the salt in it. It’s all right though, because we found cooler things to do later on. The next interesting thing we saw was the sign saying “Welcome to Idaho”. We took a little break to get out and take pictures just for fun. On the way to our original destination, Snake Lake, we saw a cool water park on the side. With our camper, we can’t take real sharp turns or we may get stuck. We didn’t know if there were any roads that we could U-turn and get out, so we hesitated going in.

We used google maps and found another road that we could use to get out, and we went to check it out. We ended up not even doing the water ride in the first place. We saw people white water rafting, and others having barbecues and all sorts of things going on. The name of the town was Lava Hot Springs, and apparently they were world famous for what they had to offer. We checked out their hot springs, and they were really well done. We didn’t didn’t want to buy a pass to get in because it was expensive and we wouldn’t be there for long (later we found out that statement was relatively FALSE). Instead we walked around  and saw so many places that had inner tubes. We had seen people using them in the way in, and they were all having fun, so we decided to rent a four seater out.

We got our Lake shoes from the camper and our dad got the Go Pro. We walked over to the place to pick it up and the woman there held our bag for us. We walked up the hill and waded down into the river. It was very fun, and we moved around d a LOT. We got wet from the dips in the water and laughed about it while we were turning and spinnig the tube around in different directions, trying not to be the one facing backwards. We went to do it again since we had so much fun we met up with some people on the way, and got onto a truck to get carried back to the beginning. The truck had a trailer behind it that was complete with a loading carrier for the tubes and some cool benches nailed down in the front for us to sit on. We met some people on the way over that we’re really nice.

This part right here, I thank usathroughoureyes.com so much for his feedback, saying that we should always go with someone else on a new hike that had already done it before: the nice man we were with told us that the river levels were actually rated, like movie style. He said the one that we did was PG. we got s little too daring and decided to go too far to the next level. We skipped past PG, past PG-13, and went directly to R. We went with the same people along with them, and we followed closely behind. There were two large drops in the R section, and the. It would lead to the lesser large drops in the PG-13 section, and then back to the little fun part of PG. The people said before we did it to stay to the left of the river, because the right was a sheer deop that was REALLY far. The one on the left was only 5 feet (“only” was sarcastic). We went behind them, and my dad was the one that went backwards.

He was leaning back and he weighs a lot more than us, so he pushed the raft under the water and sucked it under. The raft shot upward into the air and came down upside-down, and I started to inhale water when I was stuck under the the raft. I scraped my legs on the rocks as I grabbed on, readying for the next part. I found a way to get out of there and came up to the raft. My dad had apparently went all the way down and hit the bottom of the rocks. My dads life vest was used as a trampoline for my mother, who fell off of the other end, right on top of him. We all got up to the bank of the river and flipped the raft back over. We did realize that he lost his new Go Pro… whoever finds that and plugs it into their computer, they will be in for a surprise when they upload THOSE files on! But hey, We’re we done yet? (Surprisingly) NO! We went over the other one. This is where I thank usathroughoureyes.com so much for helping us with his tip. The people we went with saw the entire thing, and helped us on the next R level part. They went down first, and then we went down and hit the rocks again. After that, the ride was a lot better except for the trees smacking us in the face as we drifted under them, but once we were done, we were so happy we did it. We just did not want to do it again! We left with the experiences in our heads and the pictures on our phones, headed for our original destination: Snake Lake!

23 thoughts on “Rafting the Rapids”