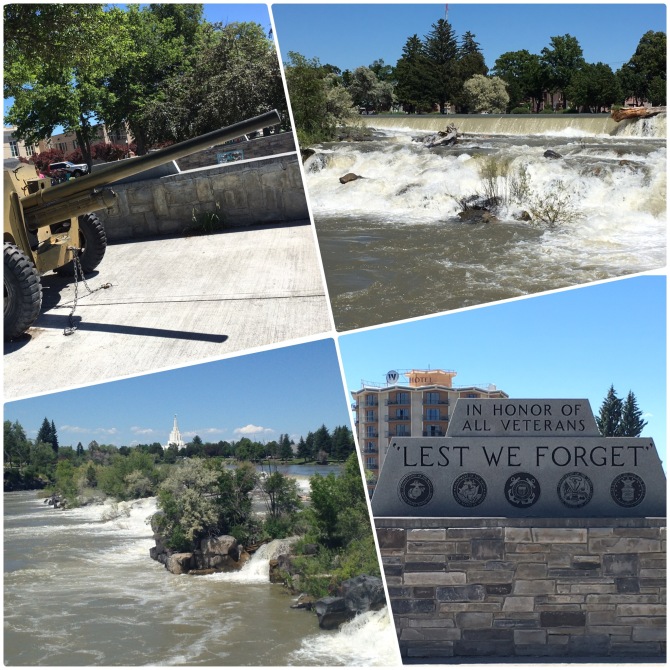 The first thing that I did in the morning was log into my blog and respond to the comments that everyone has sent me, and the questions as well. I spent a while talking to some of my true followers, but a lot of my time before the afternoon I didn’t do very much. I did, however, end up going to the store located in the center of the campground. I still needed to go to the real store for actual groceries for tonight’s dinner, but this one was shopping for me. I didn’t end up buying anything because although I have a lot of money saved up, we will be gone for a long time as well.

When the day actually started outside of my blog (I like my blog but it’s not everything of course) was when we made an attempt to go to the store. The drive there would have been about 10 minutes, but it ACTUALLY took around 4 hours to get there, and i’m glad it did. We took a wrong turn, or more accurately didn’t turn in the first place, and that took us down the wrong road. There were a lot of Silos and tall towers that were obviously build for industry, and machines that were dropping brown little things into them… Wait, they were Potatoes! The name of the company on the main concealed building said IDAHOAN, and they were obviously a potato farming company. We decided to check them out and see if they had tours. We walked into the building and there was a Key Code needed to bypass the door. Obviously, this was a manufacturing building and it did not offer tours. We walked back outside and walked toward the large buildings there.

We saw a man in an orange Vest coming towards the parking lot of the Industry, and we decided to talk to him. The conversation was long, but it ended up interesting. The man’s dad had apparently been in the Air force when JFK was assassinated, and he flew one of the huge B-52 bombers. A strategy in was that has been around for a long time is to attack the leader and then wipe out the rest of the country while they were confused. To be safe, america evacuated their planes and boats from possible attacks and readied defenses so the enemy (not a powerful country, just an angry man with a Sniper rifle). But during that time, those extremely large B-52 bombers all ran up the runway one at a time in whatever clothes (or no clothes) that they were in with such a hurry that they left immediately for safety. Nothing happened, but they were up there for days until it was safe and attack was less possible to happen. Anyway, we liked hearing what he said but he wanted to go home and we wanted to continue our day as well. I just wanted to share that, sorry for getting a little bit off track.

Anyway, as you see in the Photos that I used for the cover photo of this post, we did go to Snake river, but not before getting side-tracked once again. We went to the center of the town, and that’s actually how we found it. While wandering we saw a lot of cool things, like a gamer shop (all board games, not PS4 or Xbox kind of games like most people these days would have thought when I said that), and I also became a billionaire. That’s actually not a a joke. Seriously. You see, the catch is that I am a billionaire in another country. For just a little bit of money I bought a 5 BILLION dollar bill for INFINITY COINS (the name of the shop). The story is that the one country that it belongs to, Zimbabwe, was in a whole lot of debt. If you want to see the long story, here is the link to get it from an expert, but the way I know the story, they wanted to pay off that debt so they printed more money. And more. And a lot more. They fell into a crippling derpression, and you would need around 200 Trillion dollars to buy *Drum roll* A loaf of bread. That country has a net worth of about 400 dollars. Yeah, that is a SERIOUSLY poor country!

After that was when we went to the River. I was going to see it all along, but my family and I had seen a lot more than we expected to see that day! As you can see, it was such a huge river but it was also a very amazing river the way that the water flowed down the sides (a simply amazing view). We walked around and saw a cool site that lets people remember 4 of america’s worst wars. There were murals on the short 3 foot walls on the sides of the memorial, and they all had the tags of what the wars were from: First, WW I, next WW II, Korean, and then Vietnam. To end the memorial was a real Howtizer that was actually taken from the war (See the top left section).

We went home and decided to end the night by renting a movie, and that’s how we enjoyed the rest of our night. Thanks for reading everyone!