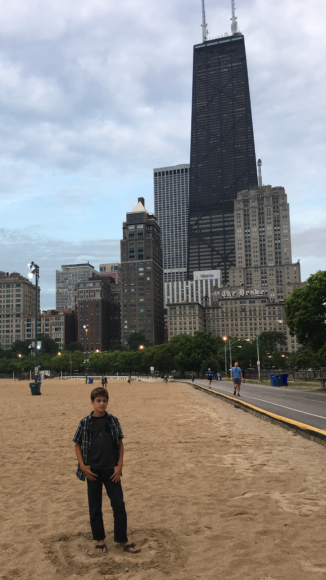 After our first day REALLY being in downtown Chicago, we were excited for the next. It didn’t start until noon. We drove down again on the same hour-long drive, except this time it didn’t feel like an hour. We rented a RedBox movie starring The Rock so we new it was going to be good. We watched it all the way until we got there and got stuck in a MASSIVE traffic jam. It was the day that we were supposed to go to the Chicago Cubs vs Cardinals game! We really wanted to get in but sadly, even though it was already the 5th inning, the tickets remained the same price! We had homes to get at LEAST half off! With only half of the day left to spend in Chicago, we quickly decided that sadly we were going to have to miss the game and go on to what was next…

Going back to this morning- for some reason my brother really wanted to go to the beach. He said he really wanted to build a sand castle. Can anyone here guess what we did? Go to the beach- yes. Build Sand Castles- no. When we got there we got out all of our stuff and got ready to go. We could see that the beach was going to be nice! There was a huge drop where the sand was so we couldn’t see if it were flat sand or had rocks in it. We payed our outrageous parking fee and got all of our stuff out of the car. We were all excited but Aidan was REALLY into it. And then it started to drizzle. And the rain. We looked up and saw that it would be a huge storm, so we packed up all of our stuff and sat in the car to try and wait it out. It was POURING rain! It only took about five minutes to leave, but those minutes were strong.

Once it was over, we got out and examined the area to see if we could still go. No clouds and the ground wasn’t flooding, so we were good to go. We didn’t get anything out of the car and just left in case it started again so suddenly. We jogged off to the beach and got ready to jump into the sand, but…. there was no sand. What? The entire “beach” was made of hard cement! It was O.K. though, we didn’t really care. Well, Aidan was a little bit bummed he didn’t get to make his sand castle… but for the most part we were fine walking across the “beach” just the same. After a while of walking, we were in for a surprise (20 minutes later) that we could see sand! That’s when we walked over in another few minutes, looked at the view, and I was able to pose for my blog-thumbnail picture (maybe a little bit younger than some of you may have possibly expected?)

After we spent a few minutes at the beach we had to go back because we would need to pay an additional $30 to stay for another hour. We made it just in time, left, and went to the famous pizza place. We took a walk that I will forever remember through Chicago. It was completely amazing, being on the brink of dawn but having the sun still holding on to the horizon. We entered the pizza place and placed a hold to order. We sat outside for somewhere close to an hour, just relaxing and looking down the alleys as glamorous buildings tried to scrape the sky. We were finally called in by our friendly server to come and eat. The style to the old building was very odd, it was decorated by…. people. Not really people, but their drawings. You were allowed to draw ANYWHERE! We sat down for our pizza and waited as we watched the TVs and talked. It got too noisy after a huge group came so we walked up he once again marker decorated stairs to the upper story of the building. We ordered our pizza and after only 30 minutes or so he came with our order; we got thick crust yesterday so today was the day to try thin. My little brother Aidan wasn’t so happy about that, but he was calm again in a few minutes. We stayed there and once we were done I grabbed a marker and drew on the ceiling. How did I get up there? By standing on the railing and reaching up, of course! Nobody had wrote there because it was too high up, so I was the first one to promote my blog by simply writing CROSSCOUNTRYLIFEBLOG.COM- MY ADVENTURE, and signed it; -LOGAN. After that we took our last looks around on some of the black and white and sometimes blue artwork everywhere before the long ride back. 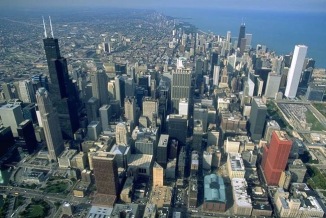 After two days of driving we finally got to our campsite and we were ready to go and set up camp. As soon as we were there however, we just started backing the truck in when the back made a loud noise. The bike rack there had just given up and it fell to the ground. The great news was that none of the bikes were damaged because they had been raised above the ground even though their carrier was injured. The really BAD news was that since our $200 bike rack was broken, and unless we bought another one we would have to discard our bikes. Uh-Oh. Looks like we weren’t going to the big city until later that day (we weren’t in a campground IN the city, but an hours worth away from it)! We called different places to compare prices and find the short percentage of bike-racks that were the size we needed. I slept in back for a while until we had to run a few short (not really) errands. On the drive we found a seller that would give us a bike rack that we needed for only $70. We drove an hour and a half to get to him and when we did we parked near him in the parking lot. We didn’t have the right amount of money that we needed to pay him (we only had some small bills, the others were in hundreds).
While we were in the store we bought a few items and then went outside to make our bargain. The bike rack was perfect except the fact that it could be easily removed. We needed to find a welder that could drill a hole in it so we could put a lock through. After talking for a while (it’s always great to meet a local) and saying our goodbyes to our new friend, we were off to get our problem resolved. After a long time of trying to fix our bike rack we finally (after 3 hours and 2 different companies) found someone that could do it for us. There was a dog inside that kept us company (the business’es mascot) until they were done and we could go home. Sadly we could not make Chicago that say, but we could the next. We went home to take showers and watch shows. One thing to note, however, is that the showers at the campground didn’t have any water. Not only that, but the SHOWER water was all well water. The water had minerals in it so that the sides of the stalls were brown! Not a very great way to attract customers back…

Anyway, the next day was definitely better than the first. Other than the simply outrageous travel fees and the moderately high parking prices (no offense anyone from Chicago, your city rocks. Where were from, however, the parking is day was a COMPLETE success. The drive to Chicago wasn’t that great until we actually got into he city itself. The buildings were huge! I know I keep saying this, but this is the place that I would want to spend more time in above everywhere else. We were all somewhat hungry but we decided to go to the Animal museum of Chicago first. It looked like one of those university campuses because it was so huge. Each of the building-sized rooms were put into catatories of general species. It really was pretty spectacular. The water tanks were the best part though! They must have had close to 500 tons of water that housed the sharks, dolphins, seals, and all of the other huge beasts that they held there.

The next place we went was to the shoreline. We had booked an architectural river cruise that our cousins had recommended to us. We looked down the boardwalk for a long while until we asked for directions and turned around to go in the actual direction of the tour. Once we boarded the boat we were in for a ride. Not just being an architectural tour, it was also a reach into the past of Chicago. The guide was great! All of the buildings had SUCH history in them! It was amazing to see what Chicago had to offer; from the RIVERS perspective. On the way we actually saw the Chicago Cubs! They were at a party inside a shoreside restaurant and the trophy sat in the middle at a table. On the way back the tour guide mentioned it and gave us credit for our spectacular find.

After we got off the boat we immediately searched for food. We were all so hungry that we thought about an Uber but we realized that we should just probably just walk and save the money. On the way back into the section where the BIGGEST buildings were we asked some cops where the best pizza was. One of them was a man, and one of them a  actually got into a heated debate about where to eat! The woman told us to turn left and the man told us to turn right. After a few minutes of arguing the man said this:

“How many days will you guys be here?”
“Two”

“Why don’t you go one today and the other tomorrow?”

So that’s what we did. We turned left that day and had the best pizza of our lives (I didn’t LOVE the pizza, not being a criticized, but I think there was too much cheese. Everyone else, however, loved it). After that we went home (well, Camper home) and watched two shows again to perfectly end the night. I LOVE CHICAGO!